Waiting for Filippo and Into the Unknown... book reviews

After reading Indian  Captive, I was reminded how much I miss reading picture books with elementary-age school children.  So, to remedy that, I perused my bookshelf and located
Into the Unknown and Waiting for Filippo. 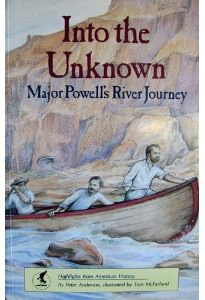 Into the Unknown: Major Powell's River Journey introduces you the man and the adventure of canoeing down the Green and Colorado Rivers to map the canyons.  With only ten men and four boats, these brave souls pushed off into the unknown on May 24, 1869.  Three months and more than a thousand miles later, the men had emerged from the great unknown, The Grand Canyon.


This is another wonderful early American history reader.  Major Powell's journey occurred after the Lewis and Clark expeditions which received much coverage.  Take a peek, you may just find a gem of a book for you and your child!

Waiting for Filippo is a well-written biography on the life of the Renaissance architect Filippo Brunelleschi.  Even though he was born into an upper class, his parents allowed him to pursue his dreams and giftings.  His natural talents for the arts led him on an exciting career.  Beginnning as a goldsmith apprenticeship and ending as the architect who build the dome and crowning lantern for the Cathedral of Florence.
Did I mention... this is a 3-D pop-up book!  How cool is that!