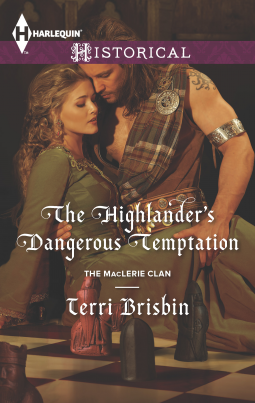 Cursed by past tragedies, notorious Highlander Laird Athdar MacCallum has devoted himself to leading his people — and has vowed never to marry again.  Until he is utterly disarmed by the innocent beauty in the eyes of Isobel Ruriksdottir…

Isobel is drawn to the vulnerability she senses behind the fearsome façade of the clan chief. But with his formidable reputation, he is strictly forbidden.  Being together can only lead them into danger, yet the temptation to risk all for their perilous passion is impossible to ignore.  ~ Publisher's Description


Step into the rich history of keeps and clans of Northern Scotland in 1375.  Where marriages are arranged and villagers work together for the betterment of all.  Life was hard; people died.  But, for Athdar, it was those closest to him... his wives and newborn child.  Swearing off any further marriage, he falls for the innocent and beautiful Isobel.  Can an innocent young woman change his heart and his hearth?
I enjoyed reading about this time period.  The fact that a passionate romance ensued made for a nice read!
My rating:
3.75 out of 5 stars
B

I received a complimentary e-copy of The Highlander's Dangerous Temptation from Harlequin Historical and NetGalley for my honest review.

A Weaver Beginning... a book review 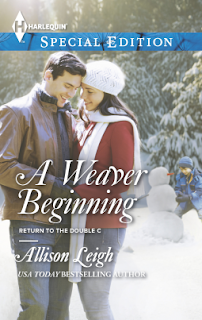 Small town deputy Sloan McCray was making amends for his past. They called him a hero but only he had to live with the difficult choices he'd made. And he certainly wasn't prepared to fall in love again, not even with his beautiful—and innocent—new neighbor, whose very presence was a balm to his troubled soul.


There was no doubt in Abby Marcum's mind that Sloan was the guy for her. Though she'd moved to Weaver, Wyoming, to make a better life for her little brother, she saw her future with Sloan. Now she had to convince the man who felt unworthy of love that she and her heart were his for the asking….
~ Publisher's Description


*  *  *  *  *  *  *  *  *  *  *  *  *
I enjoy a good romance, and Allison Leigh's A Weaver Beginning did not disappoint!  She weaves a beautiful story of every day happenings and brings joy to the reader.  How many grandparents, siblings, and others are raising children not their own.  Yet, in the midst of all the decisions and living, love can be found.  The question to ask is, "Can it be won?"  We all make decisions in our lives that we wish we could change.  But, it is those decisions that make us the people we are today.  A Weaver Beginning embraces the characters' past and looks forward to a bright future, if only the choice is made....
My rating: 4 out of 5 stars
B+
I received a complimentary e-copy of A Weaver Beginning from Harlequin and NetGalley for my honest review.
Blessings,
Ellen
Posted by Ellen at 11:02 PM 0 thoughts shared 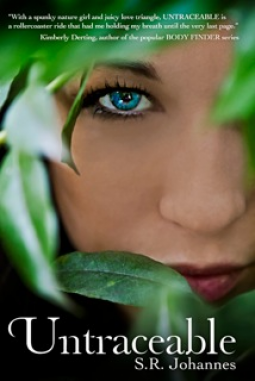 "Grace has lived in the Smoky Mountains of North Carolina all her life, patrolling with her forest ranger father who taught her about wildlife, tracking, and wilderness survival. When her dad goes missing on a routine patrol, Grace refuses to believe he's dead and fights the town authorities, tribal officials, and nature to find him.


When I first read about this book, I loved the idea of a strong, teenage girl heroine.  What I didn't expect was the wonderfully written twists and turns in the plot.  From the opening scene to the closing page, Grace does not allow those around her to dictate her thoughts and feelings.
She believes her father is still alive and acts on those gut feelings.  As she searches the forest for clues to her dad, she crosses the paths of some underhanded creatures... humans included!  Can she solve the mystery of her dad's disappearance in time to save herself?  Or is she destined to follow the fate of her dad?
S.R. Johannes hooked me from page 1!  The details of the forest floor and animals were beautifully written and pulled me into the story.  Grace became a literary friend; I found myself cheering her on and hoping, against all odds, she would win out in the end.  When I finished the book, I clicked on over to Amazon and found the second book in the series, Uncontrollable.  With a click of the mouse, I now own the second book and can't wait to hang out longer with Grace!
My rating:
4.5 out of 5 stars
A


Right now, Barnes and Noble and Amazon are currently selling
the e-book version of Untraceable for $0.99!

What are you waiting for.... go get your next read!
Untraceable by S.R. Johannes was the Winner of 2012 IndieReader Discovery Awards (YA) and the
Silver Medalist, IPPY Awards - Best YA.

I received a complimentary e-copy of Untraceable from NetGalley for my honest review. 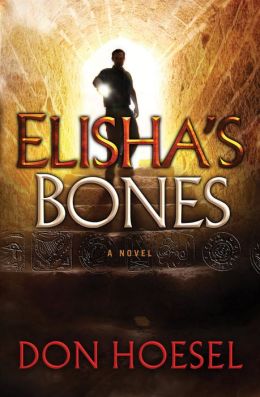 After reviewing the third book in this series - Blood and Bone, I found that you can download a FREE copy of the first book, Elisha's Bones from Barnes and Noble.  Click on the picture to be taken directly to the website!
See my review of all three books in the series HERE.
Hurry, this may not last long!  What have you got to lose?

Blood and Bone... a book review 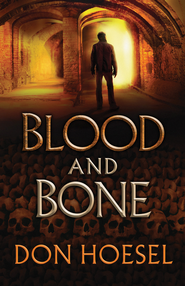 When I first requested this book, the main character sounded familiar.  What I found in my pre-reading research was that I had the first novel in the series, Elisha's Bones, on my personal bookshelf to be read.  So, before I even cracked open the spine of Blood and Bone, I read Elisha's Bones( #1) and Serpent of Moses (#2) in the series.

Although you do not have to begin with the first book in the series, I believe it did help me to get a feel for the characters and their personalities. Jack Hawthorne, an archeologist turned college professor, is lured back into the field in Elisha's Bones by a millionaire seeking the healing powers rumored to be in this prophet's bones.  But, the bones have been, and still are, protected by a secret society spanning 3,000 years. With the help of his former girlfriend Esperanza and her brother, Jack must not only locate the bones, but stay one step ahead of those who will kill to protect them.  From a sleepy town in North Carolina, the duo hop from continent to continent seeking these biblical relics.

2 Kings 13.20-21: "20 Elisha died and was buried.  Now Moabite raiders used to enter the country every spring. 21 Once while some Israelites were burying a man, suddenly they saw a band of raiders; so they threw the man’s body into Elisha’s tomb. When the body touched Elisha’s bones, the man came to life and stood up on his feet."

Jack's archeological adventures continue in Serpent of Moses (#2).  Within 3 years of locating Elisha's bones, Jack has returned to archeology full-time.  While his absences from Espy are expected, this one is different.  Esperanza receives a odd call regarding Jack from an antiquities dealer with troubling news.  After she follows Jack oversees, she soon realizes that he may be in trouble.  Espy and her brother begin to follow the clues that Jack had previously.  He not only has one entity after him but three: the Libyan government, the Vatican, and an Egyptians assassin.  Once again, the search for a biblical relic has brought another life or death possibility to Jack and those he cares about.

Finally, in Blood and Bones, Jack and Espy marry and settle down with their two sons into a college professor's quiet life... or so they thought.  Now, 10 years after the Serpent of Moses had been found, he receives an emergency call to flee his home and find sanctuary elsewhere.  With the help of a co-professor and ex-CIA agent Ducky, Jack disappears into the night with his family.  Yet, while they follow Ducky's lead, the boys are kidnapped and the only possibility of their safe return hinges on relocating Elisha's Bones to trade for their own.  Once again, we join Jack and Espy on a globe trotting adventure.

I thoroughly enjoyed all three books by Don Hoesel!  Today, on Barnes and Noble, you can download Elisha's Bones for free!  How's that for a preview of this terrific series!  I don't know how long this will last.  So, what are you waiting for?

I received a complimentary copy of Blood and Bone from Bethany House Publishers for my honest review.  I bought Elisha's Bones and Serpent of Moses for the pure enjoyment of a great story!