To Honor and Trust.... a book review 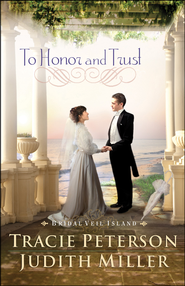 
Bridal Veil Island resort... a place where the wealthy Northerners can escape the bitterness of harsh winter months and continue their lives in the warmth of the South.

Callie DeBoyer is unsettled as she arrives at Bridal Veil Island with the Bridgeport family. She's just received a letter from her parents, missionaries in coastal Africa, stating they are in dire need of more personnel. Should Callie give up her governess job and join her parents in their important work? Is God calling her to the mission field, or does she just want to escape the emotional scars of being jilted by her former beau?

When she enrolls young Thomas Bridgeport in golf lessons, Callie meets Wesley Townsend, who urges Callie to take lessons, as well. During their time at the golf course, Callie comes to care for Wesley--until she discovers hidden secrets about his past.

Then expensive jewels go missing from various homes on the island, and suspicion is aimed in Callie's direction. As the investigation continues, Callie wonders if she should escape it all by going to Africa. After the secrets he kept about his past, will Wesley ever be a man she can honor and trust for the rest of her life?

Not having read the first two books in the series, I was surprised at how easily I slipped into the storyline and characters.  I enjoyed watching the romance between Wes and Callie take shape almost as much as her putting other suitors in their place!

When specific characters were introduced, there was no question as to what part they would have in the book or their character's character.  This took away from the mystery of it all.  As a historical fiction novel, other than knowing it was in the early 1900s, I never felt that I was gleaning any historical facts or details about this time period.

Overall, I enjoyed the book.  Yet, the predictable storyline and characters took away some of the novelty of the story.

I received a complimentary copy of To Honor and Trust from Bethany House Publishing for my honest review,  No other compensation was received.