A MUST Read for Every American! 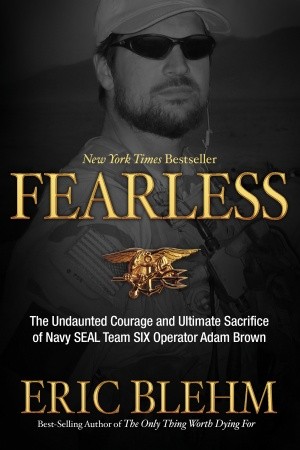 When  you hear about NAVY SEALS, what is the first thing you think?

What picture do you see in your mind?

Highly trained soldiers / sailors
fighting under the cover of darkness OR
something else...

Have you ever thought about the type of men who feel called (or led) to voluntarily signing-up for the most physically challenging and dangerous career in our military?  Who are these courageous men who put their lives willingly on the line daily to protect the freedoms we enjoy in America?

Fearless by Eric Blehm is an open and honest biography on Adam Brown, a Navy Seal who gave the ultimate sacrifice for his beloved country.  In Adam's own hand, his desire to share his whole life story after his death was his final act of bringing glory to God - his life before Jesus Christ and his wife, Kelley.

Throughout high school, Adam was the one teenager who strove to help others.  His parents knew that if he promised something, it was as good as done.  When he went off to college, he lost his focus and close friendships and fell into the wrong crowd.  After dropping out of college and spiraling down to drugs and jail, he reached out to Jesus Christ and committed his life to Him.

He was truly a new creation, but had many demons to overcome.  Finally, he found himself being led to a life of the Navy Seal.

"Fearless is the story of a man of extremes, whose courage and determination was fueled by faith, family, and the love of a woman. It’s about a man who waged a war against his own worst impulses and persevered to reach the top tier of the US military. Always the first to volunteer for the most dangerous assignments, Adam’s final act of bravery led to the ultimate sacrifice."  ~  from Publisher's description

I received a complimentary copy of Fearless from WaterBrook Multnomah Publishing Group for my honest review.