The Bible in 90 Days 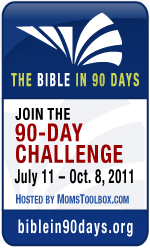 This week I read from Deuteronomy 24 through Joshua, Judges, Ruth, and 1 Samuel.  What a week!  Here are a few things which stood out for me.
1)  At the end of Deuteronomy, we see that God blesses us for obedience.  (Later we learn of the curses, or lack of blessings, in Judges.)  Moses dies after seeing the Promised Land, since he "broke faith with Me (God) in the presence of the Israelites at the waters of Meribah Kadesh in the Desert of Zin and because you did not uphold My Holiness among the Israelites."  (Deut. 32.51)  And because of this he is not allowed to enter the "land flowing with milk and honey."  Yet, before Moses dies, he renews the Covenant between God and the Israelites.
2)  In the book of Joshua, we learn how a prostitute, Rahab, believes in God (from what she has heard through the grapevine) and is saved through her faith.  I witnessed the miracle of the day when the sun stood still to give light to the Israelites to win their battle.  Joshua then oversees the division of the Promised Land to the tribes of Israel.  And again, Joshua renews the Covenant between God and the Israelites before he dies.
3)  Ahh, the book of Judges.  This book could have been written today.  The recurrent scripture, "The Israelites did evil in the eyes of the Lord; they forgot the Lord their God."  According to Judges, when the Israelites cried to the Lord for help, He would send judges to save them and bring them back into fellowship with Him, but read what happened....
"Then the Lord raised up judges, who saved them out of the hands of these raiders.  Yet they would not listen to their judges but prostituted themselves to other gods and worshiped them.  Unlike their fathers, they quickly turned from the way in which their fathers had walked, the way of obedience to the Lord's commands.  Whenever the Lord raised up a judge for them, He was with the judge and saved them out of the hands of their enemies as long as the judge lived; for the Lord had compassion on them as they groaned under those who oppressed and afflicted them.  But when the judge died, the people returned to ways even more corrupt than those of their fathers, following other gods and serving and worshiping them.  They refused to give up their evil practices and stubborn ways."
Judges 3.16-19
Here's my thought.... why haven't we learned this lesson yet? We still do evil and then expect God to forgive and clean-up our messes. We have the Word of God in our hands; if only we would read it, learn from it, and apply to our own lives.
Oh, and how many of us would honestly admit to having idols which take the place of God?  Read about Micah in Judges 17.  He not only made idols from silver, but also a shrine, an ephod, and even named his own son a priest.  Hello there?!?!?  They were not of the clan of Levi to be a priest.  To top it off, Micah meets a Levite walking in Ephraim and invites him to live and serve as his personal family priest.
4)  In Ruth, we learn about Kinsman Redeemers.  What is a Kinsman Redeemer?  According to Bible Study tools, a kinsman redeemer is "a male relative who, according to various laws found in the Pentateuch, had the privilege or responsibility to act for a relative who was in trouble, danger, or need of vindication."
What would this look like today?  Family helping family!

5)  In 1 Samuel, we find that the Israelites have rejected God as their king and demands an earthly king like the neighboring nations.  God granted them their desire, and through Samuel, forwarned what their life would be like subjected to an earthly, human king.  Not caring about the negative consequences, the Israelites still desired a king.  God acquiesced, and named Saul as their first king.
Why am I like the Israelites?  Asking Demanding of God things which are not good for me.  Why am I not content with God alone?  Why do I feel I need more.... stuff, control, etc.
I wonder what this week will bring.....

Email ThisBlogThis!Share to TwitterShare to FacebookShare to Pinterest
Labels: Bible in 90 Days, Scripture