February 6
1862   The Union wins its first major victory in the Civil War, with the capture of Fort Hood on the Tennessee River.
1971   Apollo 14 astronaut Alan Shepard hits three golf balls on the moon.
February 7
1812   The last of the New Madrid earthquakes, a series of violent quakes that changes the course of the Mississippi River, occurs near New Madrid, Missouri.
1964   The Beatles arrive in New York for their first U.S. tour and an appearance on The Ed Sullivan Show, touching off Beatlemania. (http://www.iamthebeatles.com/article1036.html)
February 8
1693   The College of William and Mary, second oldest college in the United States, is chartered. 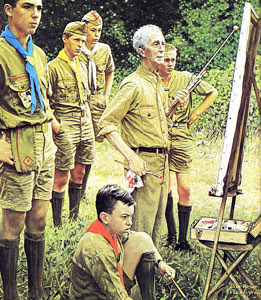 ﻿ Beyond the Easel — self-portrait by Norman Rockwell (1894–1978) with Boy Scouts,
for the 1969 calendar of the Boy Scouts of America
(http://en.wikipedia.org/wiki/Boy_Scouts_of_America)
February 9
1825   The House of Representative elects John Quincy Adams president after no candidate receives a majority of electoral votes.


1933   President Hoover designates Death Valley in California and Nevada as a national monument; one of its unique characteristics is that it contains the lowest spot in the United States, 282 feet below sea level.


February 12
1909   The National Association for the Advancement of Colored People (NAACP) is founded.

1973   Hanoi begins to release American POWs following the end of the Vietnam War.