Notice the dents from cannon balls sustained later during the Civil War
January 31
1958   The United States enters the Space Age with the launch of its first satellite, Explorer I.
﻿﻿

Launch of Explorer 1 on January 31, 1958
1961   Ham the Chimp becomes the first chimpanzee in outer space when he blasts off from Cape Canaveral, Florida, aboard a Project Mercury rocket.
February 1
1790   The U.S. Supreme Courts convenes for the first time in New York City.
1960   Four black college students begin a sit-in protest at a Woolworth's lunch counter in Greensboro, North Carolina, where they had been refused service.
﻿﻿﻿
﻿ 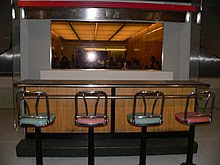 ﻿
A section of lunch counter from the Greensboro, North Carolina Woolworth's is now preserved in the National Museum of American History.
2003   The space shuttle Columbia disintegrates during reentry, killing all seven crew members.
February 1862   Julia Ward Howe pens the words that will later become one of America's most-loved hymns, "Battle Hymn of the Republic."
February 2
1653   New Amsterdam, later to become New York City, is incorporated.
1876   Baseball's National League is formed with eight teams.
February 3
1690  Massachusetts authorizes the first paper currency in America.
1913   The Sixteenth Amendment, authorizing a federal income tax, is ratified.
February 4
1826   The Last of the Mohicans by James Fenimore Cooper is published.
﻿
﻿
1861   Six Southern states form the Confederate States of America.
February 5
1918   First Lieutenant Stephen W. Thompson of the 1st Aero Squadron becomes the first aviator in the U.S. military to win a victory over an enemy aircraft when he shoots down a German plane over Saarbrucken during World War I.
1937   President Franklin Roosevelt proposes increasing the number of Supreme Court justices, leading critics to charge that he is trying to "pack" the court with justices to his liking.

Blessings,
Ellen
Posted by Ellen at 8:41 AM