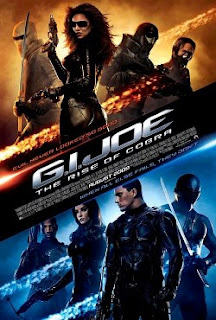 G.I Joe: the rise of Cobra.

Ok, so what do you think of when the words G.I Joe comes to mind? I think of the action figures that came out for the 8 to 10 year old boys. Now, when i came to see this film, I had high expectations. I was expecting a very well planned action film to entertain teens and adults. What I got was an action film with too many problems. The first problem is that its all action. The second problem is that there are too many characters and cameos for me to learn about each main character. Third, its a teen movie not aimed for teens. It's aimed for ten year olds. One good thing about the movie is that you can spend two hours on this film and never be bored.


The film is rated PG-13 for pretty much violence, but there are a couple of disturbing scenes involving a face shifting and an experiment involving needles. It shouldn't be a problem for most teens.
Posted by Anonymous at 5:39 PM